Zinhle is an award-winning young filmmaker, commended for her eclectic approach to universal stories and issues. Her first original documentary film is Hands Up, which follows stories of the #BlackLivesMatter movement — from Ferguson to Baltimore. Her second film, The Minority Vote, is an original non-fiction documentary covering the most pressing issues facing millennials in the heat of the 2016 election.

In 2015, she was a fellow for the Full Frame Documentary Festival and co-produced and edited the short documentary, Follow the Noise. In 2014, she was the Director of Photography for TEDx Foggy Bottom and three of her TEDx videos chosen as an “Editor’s Pick” on TED’s official website. Zinhle has also produced videos for the Smithsonian CROSSLINES Festival, The George Washington University, and Planet Forward. She has a certification in documentary filmmaking from the Institute for Documentary Filmmaking at The George Washington University.

An original non-fiction documentary feature film by NowThis news. More than two decades after the shooting at Columbine, an entire generation has grown up under the threat of gun violence. This film examines the epidemic of school shootings and their lasting impact through the eyes of survivors. Zinhle was a cinematographer and field producer for this film.

An original non-fiction documentary covering the most pressing issues facing millennials in the heat of the 2016 election. 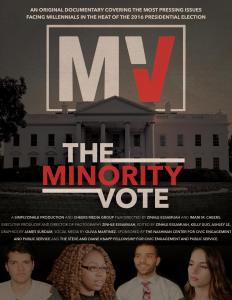 An award-winning documentary about the #BlackLivesMatter movement — from Ferguson to Baltimore. A 2015 film. Trailer below: